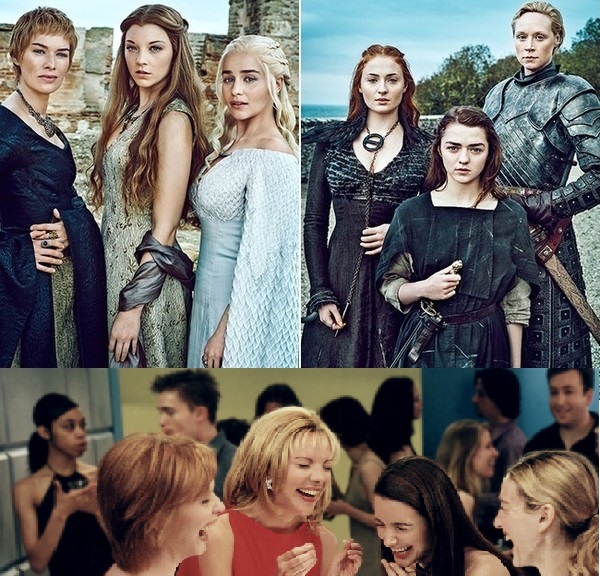 In honor for all women…that fight despite all expectations and prejudices. Two different shows that give so simple motives, which are constantly analyzed on higher brain level.

After so many years we are still discussing about this.
I have been reading in several magazines (different countries and cultures) some totally unacceptable comments related to one of must famous female TV shows.
I have to say they are pretty much unfounded. The story is set up in New York – one of the richest cities in the world, so specific in all ways. The only way to understand it, is that you have similar life style, money, business, fashion, fun…But first and most important; social and economic status. If mentioned facts are not set in this way, then comments becomes ugly and unprofessional.
Now; me VS journalist and critics.

Journalist: The misguided notion that this television program is some sort of instruction manual on life, which has probably sent hundreds of gullible young women to metropolitan areas where they eventually learn NONE OF THIS IS REAL
Me: It is TV show! Honestly how much you should be stupid to believe that it is instruction manual?…. Except if journalist really meant it from a personal perspective 

Journalist: It’s Totally Fine to Spend Your Paycheck on Shoes Instead of Rent
Um, no. Those Manolo Blahniks may be cute, but they won’t put a roof over your head
Me: And why NOT??? Everyone is entitled to its own folly. Living out of the box? A?

Journalist: There Are Only Four Types of Women in the World
According to the show; you’re a hopeless romantic, a cynical workaholic, a sex-addicted party girl, or an uptight prude. But what if you’re all of the above? Or none?
Me: I hate it when someone makes unnecessary group standardization. Are you shortsighted: the hopeless romantic is not only that (it is only a strongest part of her character), but this lady is also the voluptuous, fair, and persistent, with fears…

Journalist: Girlfriends Only Talk About Men and Sex
One time, a frustrated Miranda actually points out that these are their only topics of conversation, asking “How does it happen that four such smart women have nothing to talk about but boyfriends?”…but by the end of the episode, she’s back to talking about “Big, or balls, or small dicks.”
Me: This is not true. Sir, watch it again.

Journalist: You Can Wear Heels 24/7 and Never Get a Blister
We’ve actually walked through New York City in heels, and we can say with confidence: These shoes (no matter how sky-high the price) were most definitely not made for walking.
Me: Cinderella traveled in carriage made of pumpkin with a magic!

Journalist: Too much drinks and cocktails… cigarettes.. There’s Nothing Wrong with Tossing Back a Few Cocktails Every Night of the Week
Hangovers are very, very real—how are the “ladies who brunch” always so chipper, no matter how many cosmos they drink on a Tuesday night?!
Me: You can try? It is easy!

Note: You will always see what you want to see and you’ll understand in the most subjective way, because every time you look first at yourself, you will start from personal beliefs.
This show is just a show and fuc… you can understand it just as you want, and not to comment all the time just to show that you have an opinion. It is boring…..

And now: THE MOST BEAUTIFUL WOMAN TV SHOW – GAME OF THRONES.
Boys do not kill me cos of it, but it is so true.
Definitely for a while I could not understand why screenwriters killed all heroes; good guys and bad ones? From the other side Game of Thrones is well-developed story through its violence. The show uses violence for world-building. The violence is part of its world, but the show often fails to justify why.
Now everyone is talking about too much violence against the women in this show.
Shocked faces with finger in the air – about sexual violence, raping. (Go to Afghanistan and you can watch it daily – live…worse than those shown in Game Of Thrones.

Yes, the ladies were mentally and physically tortured.
Humiliated.
Killed.
BUT….
Game Of Thrones puts much more of an emphasis on horror, courage, strength… and real fear and bloody emotion from hart. These women are survivors despite all, because they have all mentioned qualities.
No wonder why are we going to look in season 7 the following:
Daenerys Targaryen : “I am Daenerys Stormborn of the blood of old Valyria and I will take what is mine! With fire and blood, I will take it!”
Cersei Lannister: “When you play the game of thrones, you win or you die. There is no middle ground.”… “Someday, you’ll sit on the throne, and the truth will be what you make it.” “What good is power if you cannot protect the ones you love?”… “Tears are not a woman only weapon. The best one is between your legs”
Sansa Stark: “I did what I had to do to survive, my lady. But I am a Stark, I will always be a Stark.”… “There is no honor in tricks.”….. “The worst ones always live.”…. “No one can protect me. No one can protect anyone.”
Brienne of Tarth: “All my life men like you’ve sneered at me, and all my life I’ve been knocking men like you into the dust.”
Arya Stark: “I wasn’t playing. And I don’t want to be a Lady.”
Because of such strong women other characters had to go… But one stayed – my favorite.

The greatest admirer of women, Tyrion Lannister:
“Everything’s better with some wine in the belly.”
“The future is shit, just like the past.”
“That’s what I do: I drink and I know things.”
“I’m here to help. Please don’t eat the help.”